New York State lists eleven grassland bird “species of greatest conservation need.” Many of these species are in danger of disappearing from New York unless we act NOW to conserve critical habitat in their historic breeding and wintering grounds.

Wintering flocks of 40-50 Short-eared owls were once a common sight in rural areas across New York State.  Now, less than 100 of these amazing owls remain in the state. They’ve been extirpated (made locally extinct) from four of the eight Northeast states where they historically nested.  Short-eared owls are listed as endangered in New York and the other states where small populations remain.

Grassland birds depend on large, open expanses of grassland to successfully breed, forage and raise their young.  Most of these species nest on the ground.  They need undisturbed areas to provide food, nesting habitat and protection from predators.

Click on the photos below to learn more about each species…

Short-eared owls were once one of New York’s most common owls. Wintering flocks of 40 – 50 owls were a frequent sight in large grassland areas across the state.  Now, there are less than 100 left in the wild in New York State.

These medium-sized owls depend on large, open expanses of undisturbed grasslands to provide them with an abundant supply of the mice and voles that are their primary prey. This habitat also provides protection from predators and supports their low flying hunting style.

Their flight is frequently described as “moth or bat-like” due to their slow, irregular wingbeats as they fly back and forth over open fields and marshes looking and listening for prey.

Short-eared owls historically nested in the Washington County Grasslands but habitat loss, pesticides and intensive agricultural use have taken a heavy toll on these unusual owls. They now migrate to breeding grounds in Canada and Newfoundland for the summer and return in late fall to spend the winter.

The owls will nest here again if we can conserve enough habitat.

NOTE:  Short-eared owls historically bred in 8 northeast U.S. states. They now breed in only 4, where they are listed as endangered or threatened; Ontario, Canada, lists them as a “Species of Concern.” 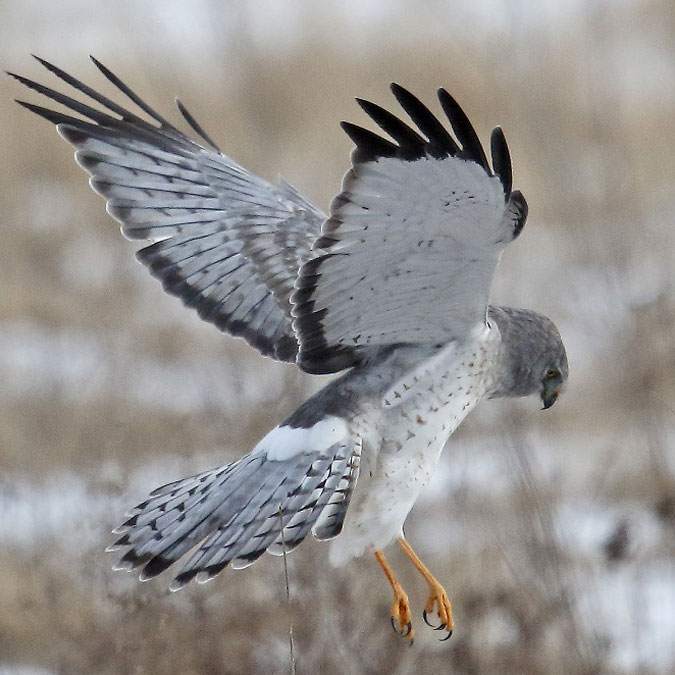 Like Short-eared owls, these slender raptors hunt on the wing. Both the male and the larger mottled brown female sport an owl-like facial disk of feathers and a prominent white rump patch. The beautiful grey plumage and mostly white underside of the male has earned him the nickname “Grey Ghost.”

Northern Harriers nest on the ground, making them more vulnerable to human disturbance and predators.

Harriers can cover as much as 100 miles a day during nesting season! They prey primarily on mice, voles, snakes and grasshoppers. A harrier coursing low over an uncut field in search of prey is a common sight in the Washington County Grasslands. 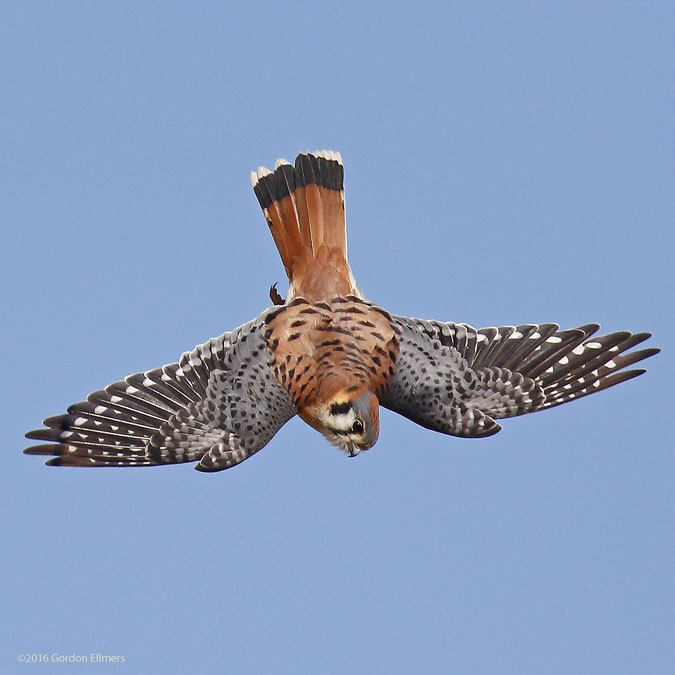 The American kestrel is the smallest falcon in North America. These small, fierce raptors inhabit open grasslands and fields, where they hunt mice, insects, snakes and other small animals. They will hunt small birds when other prey is scarce. Males have slate blue-gray wings (Note the difference in breast and belly between the male pictured at left and the female, below).

Kestrels usually mate for life. They prefer to nest in cavities in dead trees or snags but will also nest in abandoned barns, sheds and nest boxes. Females lay 4- 5 eggs that hatch in about 30 days; young fledge, or leave the nest, about one month after they are born.

Kestrel populations have been steadily declining across North America – especially in the Northeast U.S. – primarily due to habitat loss and pesticides. They can often be seen perched on power lines or hovering over fields in the Washington County Grasslands.  Learn more about kestrels…

Interested in being part of a program to conserve habitat for at risk grassland birds?
contact your local office of the USDA’s Natural Resource Conservation Service or visit New York State DEC at: New York’s Landowner Incentive Program for Grassland Protection and Management. 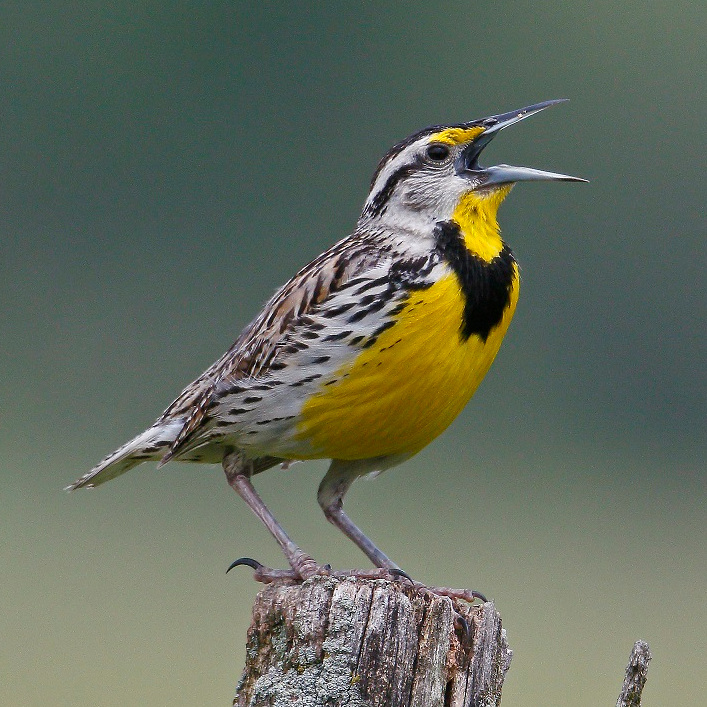 This colorful lark is a grassland favorite, beloved as much for its sweet flute-like song as for its bright colors. A black crescent over yellow underparts makes the plumage resemble a vest.  Meadowlarks have rounded wings and a short tail; the white outer tail feathers can often be seen when the bird is in flight and help distinguish them from other grassland birds. They forage on the ground, eating a variety of insects.

Meadowlarks, like most grassland birds, nest on the ground. Males arrive on the territory about two weeks before females. They can often be seen singing from fence posts or low bushes and trees to defend territories and attract a mate. Do not approach nesting birds as the female will abandon her eggs if flushed.

Eastern Meadowlarks have declined more than 80% over the last few decades due to disappearing grassland habitat caused by development, forest succession and large scale agricultural operations. 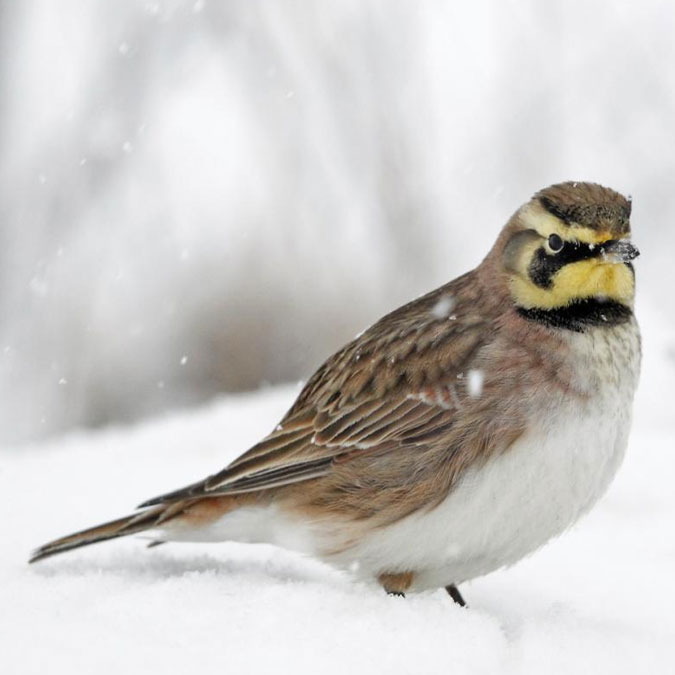 These medium sized songbirds prefer open habitat that contains relatively bare ground or short grasses. They begin breeding in late February or early March – long  before Spring officially arrives! They nest on the ground, weaving a basket of fine grasses into a shallow depression to hide it from predators.

Horned Larks are specially adapted to coldweather. Nestlings are born covered in down that provides camouflage and some protection from the weather. Pairs usually nest at least twice in a season.

Large flocks gather together in winter. They can often be seen in the Washington County Grasslands foraging for seeds in mowed fields and along roadsides… or taking a “snow bath” like the bird at right! 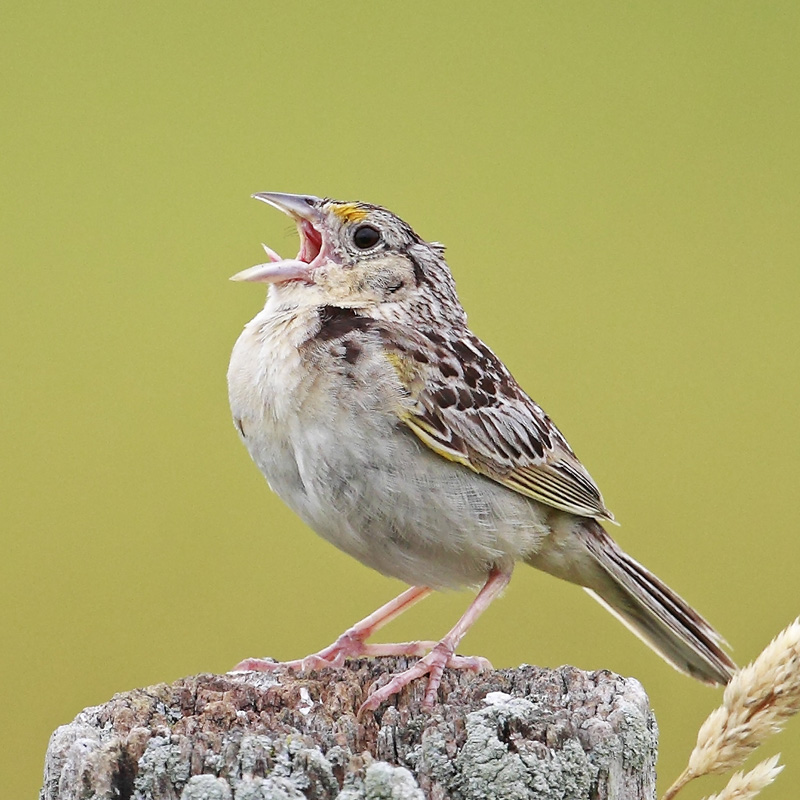 The Grasshopper sparrow historically inhabited open grasslands and prairie throughout eastern United States. Like most grassland sparrows, Grasshopper sparrows are ground nesting and foraging, which means they are usually hidden in the tall grasses. Males may be seen during breeding season singing from open and exposed perches; song is buzzy, insect-like.

Grasshopper sparrows nest in an open cup on the ground or under vegetation. Young leave the nest at about 10 days and will run or walk along the ground until they learn to fly. Diet consists seeds and insects, especially grasshoppers. Due to habitat loss this bird has seen a 98% decline in New York State. 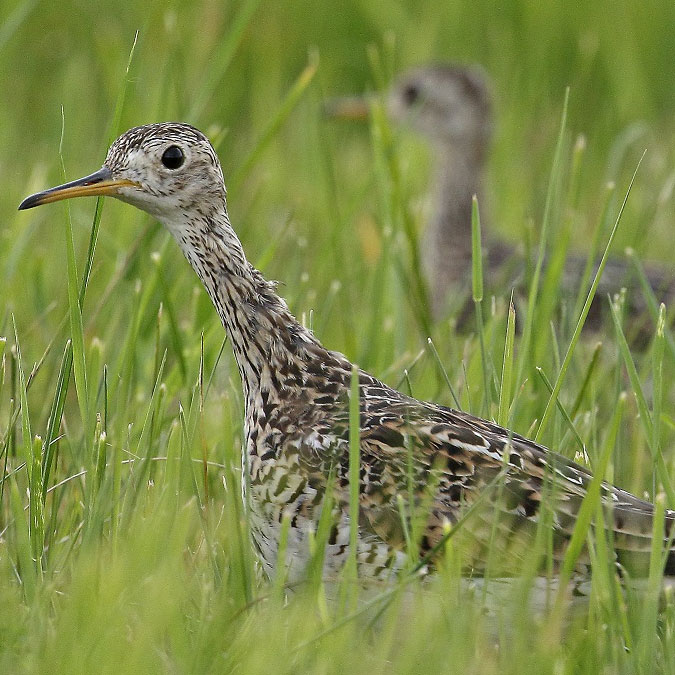 These large, ground-nesting songbirds inhabit grasslands and native prairies in North America. They are one of the few sandpiper species that breed and feed inland, instead of along coasts and waterways.

Upland sandpipers prefer a mix of grass heights and densities. They forage in shorter grasses for beetles, grasshoppers and other insects but prefer to nest in taller grasses. Call is a loud “wolf whistle.”

Upland sandpiper populations have suffered steep declines due to habitat loss and hunting. They are rare across New York State. 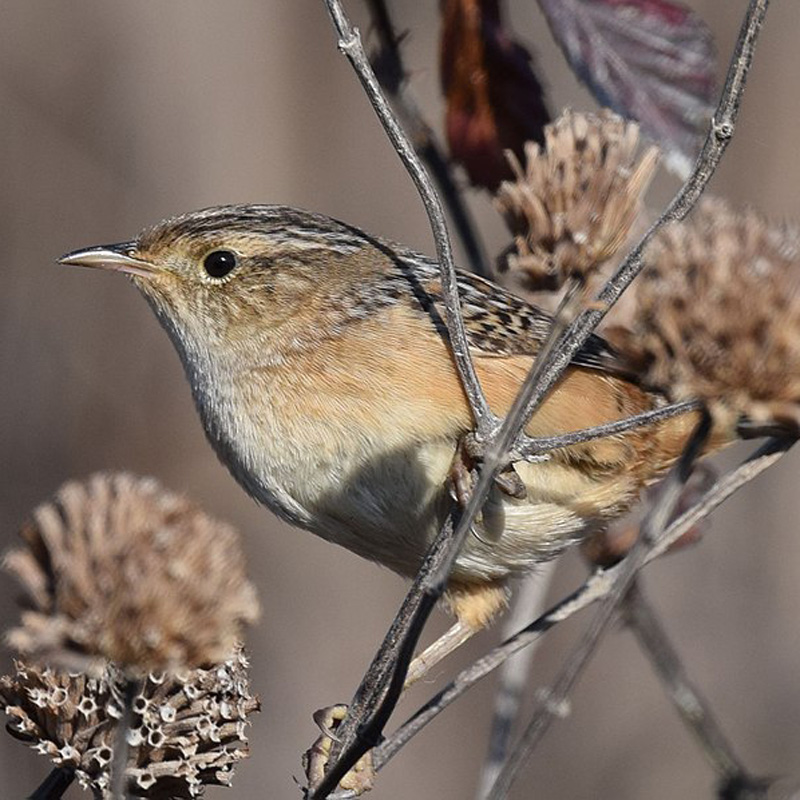 These small wrens prefer damp areas of dense, low growth, without cattails. They are secretive and nomadic; distribution seems to depend on rainfall patterns.

Males usually sing at night.  They  may have more than one mate and will nest multiple times through the breeding season.  The nest is a woven ball of sedges and grass with the entrance located on the side.

Sedge wrens forage for insects and spiders on the ground, where they are hidden by tall grasses, making them very hard to spot. 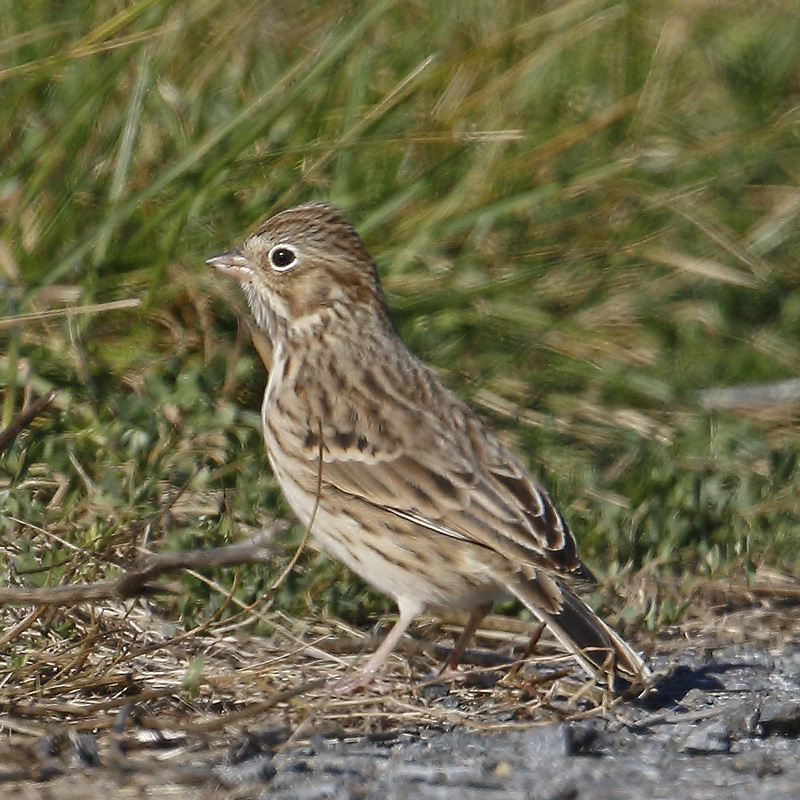 This medium to large sized sparrow has conspicuous white outer tail feathers seen when flying and a narrow white eye ring.  A sparrow of open meadows, fields and prairies, it can most often be seen when singing from an open perch.

Females build the nest on the ground, usually under or at the base of vegetation. Males will take over feeding the young of the first brood when the female starts incubating a second brood. Young fledge in 9 – 10 days but depend on their parents to bring them food for another 20 – 30 days.

Vesper sparrows have a large range, breeding across northern United States and southern Canada. They are quick to respond to changes in habitat, often being the first to occupy old farm fields reverting to forest. 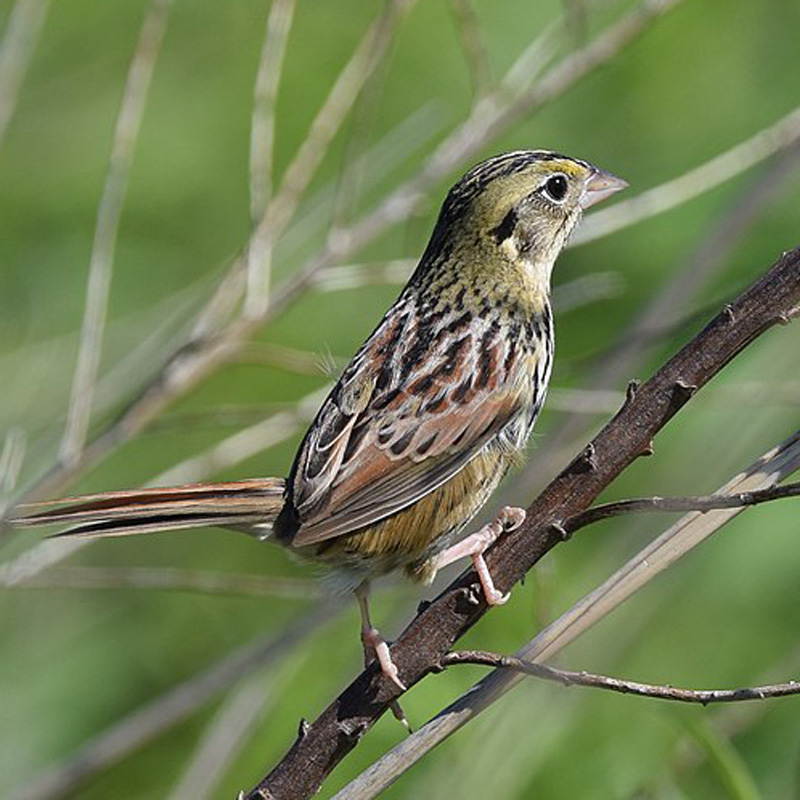 Henslow’s sparrows historically bred across the northeastern and midwestern United States. These small, secretive sparrows prefer large, flat expanses of open fields featuring tall grasses, standing vegetation and a dense layer of grass litter. They nest and forage on or near the ground, feeding primarily on grasshoppers and beetles.

Their range and numbers of this uncommon sparrow are decreasing due to habitat loss. Henslow’s sparrow is listed on the 2016 “State of North America’s Birds’ Watch List.” 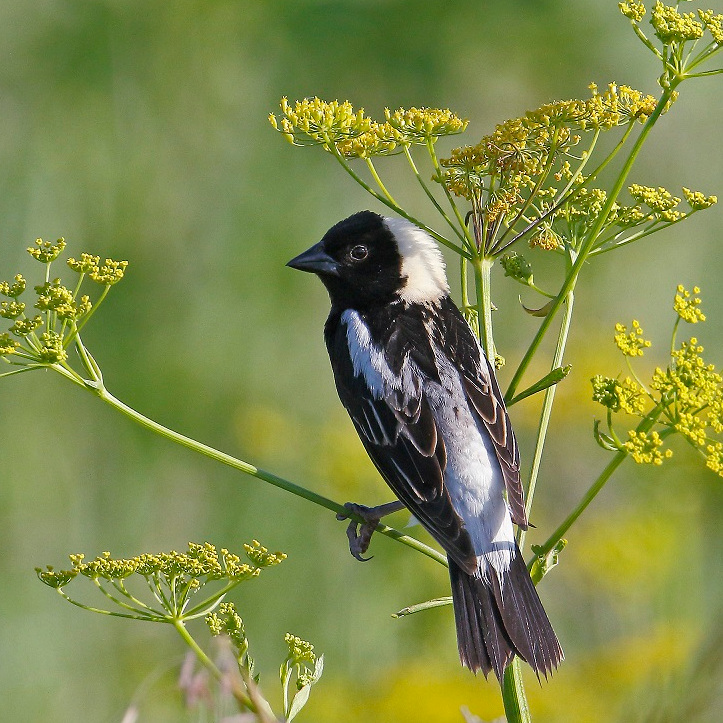 Male Bobolinks exhibit the colorful breeding plumage seen in the accompanying photo for only a short period during the breeding season (from mid-May to late July in the Northeast U.S.).  The rest of the year they resemble the more drably colored brown and buff female.

Male Bobolinks sing during their flight display to attract a mate.  Their cheerful burbling song is a harbinger of the start of the breeding season in the grasslands.

These ground nesting songbirds migrate 6,000+ miles from breeding grounds in the northern U.S. & Canada to wintering grounds near the southern tip of South America in Argentina.