Summer in the Grasslands! The chirps and croaks and buzzing of a million unseen creatures floating on the clover-scented breeze foretell the return of friends old and new. To arrive back to our grassland they made amazing treks some across open ocean and perilous stretches of industry. They dodged skyscrapers and faced inclement weather, food deserts and unimaginable obstacles.

Our Grasslands Are Their Refuge

While the birds are fun for us, our grasslands are crucial for the birds. Unfortunately, many grassland birds are ground nesters – a hazardous business! As grasslands disappeared, these species looked toward farmland as their nurseries.

Prior to the 20th century this helped some, but changing farm practices mean they now face death by harvesters, pesticides, farm animals, and farmers who see them as pests. And as intensive row-cropping takes over from hay fields and dairy farms – even more nesting habitat is lost.  Our protected grassland is their refuge and safe place to raise their next generation.

Below are a few of our returning summer neighbors – how many have you seen?

Spring has arrived when the field by the Alfred Z. Solomon viewing area explodes with little black birds wearing backward tuxedos and buff-colored hats! There are few more excellent avian delights than watching their frenetic mating display over the grasslands.

What is that bobolink doing? All those low-flying acrobatics, the swooping, fliting, hovering, and displaying, are the males competing for females.

Do bobolinks breed in our grasslands? Yes!
Ground nester? Yes, in wet areas. Males breed with multiple females, so a clutch of eggs can have different fathers. And numerous males may care for one clutch of chicks.

Migration: up to 6250 miles (10.000km) straight across the Gulf of Mexico to Bolivia, Paraguay, or northern Argentina.

Conservation status: least Concern nationwide – however; Declining every year since 1966 including in New York State. Over all 65% decline since 1970.

Fun fact: may fly the equivalent of 4 or 5 times around the earth’s circumference during its lifetime! Iron oxides in their nasal cavities and around the olfactory nerve and bulb allow them to orient by the earth’s magnetic field.

Where to look for bobolinks: The Alfred P. Solomon viewing area is my favorite place. Walk along the path on the left side.

Our grasslands are far away from the shorelines of the Atlantic or the Great Lakes’ where you would expect to find most shore birds, but unlike its cousins, this sandpiper prefers prairies and grasslands, and ours are perfect.

What is that upland sandpiper doing? That stiff-legged gate through the grass means they are foraging for insects like grasshoppers, beetles, and other bugs, and nuts and seeds. To attract the ladies, males land on vegetation or a fence post, throw their wings back, and stretch their tails.

Do upland sandpipers breed in our grasslands? Historically, yes. With GBT’s work, we have hope they will again.
Ground nester? Yes. Upland Sandpipers nest in small scrapes hidden in the grass. Chicks mature fast, in hours they are able to feed themselves and are flying in 30-31 days.

Migration: up to 5,800 miles to Southern Brazil or Argentina!

Fun fact: the female “Shorebird of the prairie” stays with her chicks for only a week! Don’t worry; dad sticks around a little longer.

Where to look for upland sandpipers: open grassland fields, and edges of farmland, especially wheat and corn. 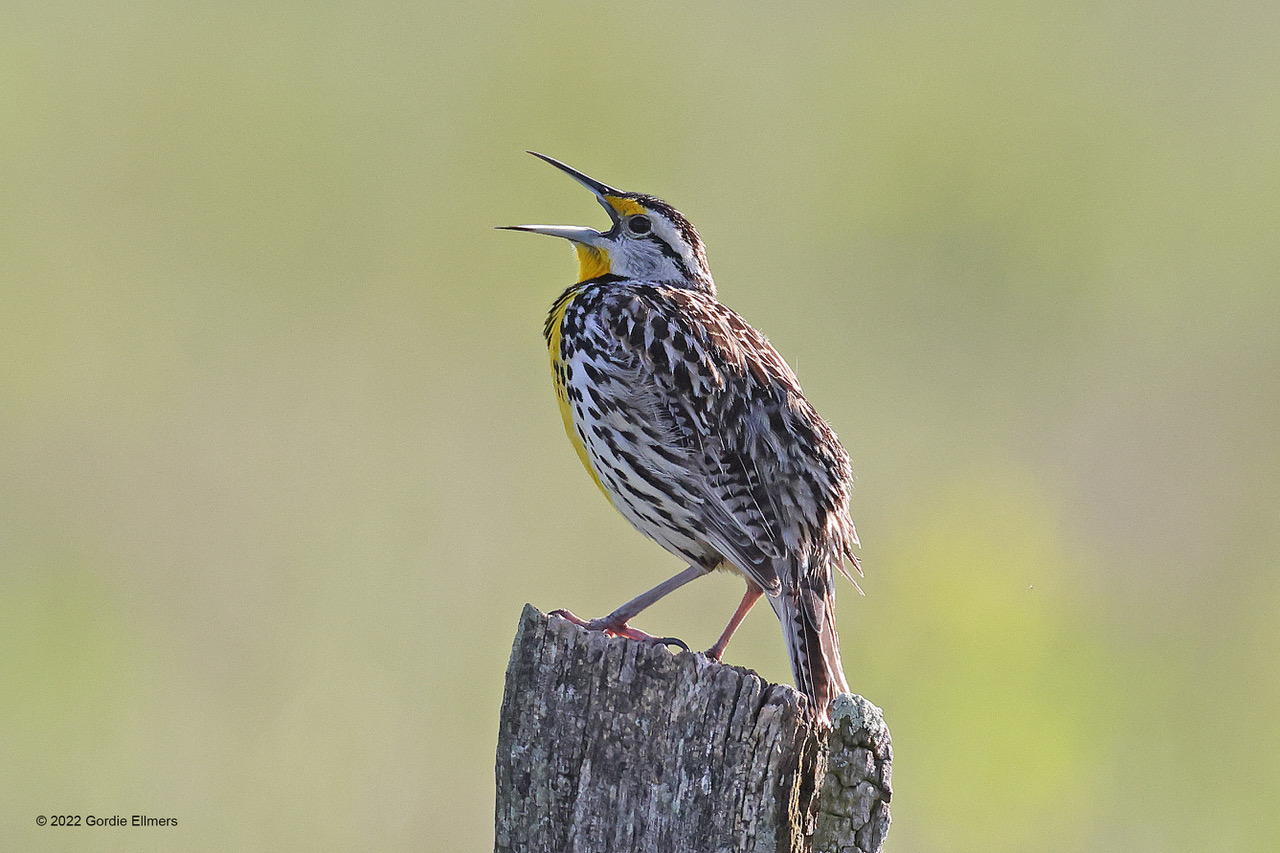 The eastern meadowlark’s song wafting over our fields and meadows announces its early spring return.

What is that eastern meadowlark doing? Males puff out their chests, point their bills to the sky, show off their distinctive black chest “V,” and sing their hearts out to defend their territory. You might also catch them “jumping” straight up in the air, in that same pose with legs dangling.

Migration: up to 600 miles to western New York State, south Pennsylvania, across the eastern U.S., Mexico, Central America, and the Atlantic coast of northern South America (Surinam and Brazil)

Fun fact: eastern meadowlarks are not larks; they, like bobolinks, are part of the blackbird family.

Where to look for eastern meadowlarks: look for their distinctive silhouette on fenceposts and telephone lines, their heads tilted upward, and their longish pointed bills open in song.

Killdeer are real characters, running across the grass, jolting to a stop every few feet, then looking around expectantly to see if their sprint kicked up any insect snacks. See if you can catch them picking up extraneous stones and tossing them back over their shoulder, adding to their ground-scrape nest.

What is that killdeer doing? Did you see a bird with a broken wing? Killdeer are great actors, pretending to have a broken wing to lure predators away from their young.

Do killdeer breed in our grasslands? Yes! They like open fields and short vegetation.
Ground nesters: Yes

Migration: our killdeer are “leap-frog” migrants, avoiding other killdeer territories by flying straight over the southern half of the U.S. to and from Mexico and Central America.

Conservation status: least Concern. Killdeer are very adaptable and, so far, generally holding their own, however their population is also declining (less than 30% over a 10 year period)

Fun fact: a killdeer will puff itself up, display its tail over its head, and “charge” a cow or other grazing animal to make it change its path.

Where to look for killdeer: school sports fields, lawns, the edges of farm land – even your driveway!

We tend to think of sparrows as ubiquitous – if we think of them at all. But this grassland specialist is no ordinary “little-brown-job.”


What is that savannah sparrow doing? Tail cocked and legs dangling, males attract mates and defend territory with a “flutter-flight” display seeming to hover in the air.

Migration: short distance, they winter in the southern US, Mexico and the Caribbean.

Fun fact: savannah sparrow chicks stay in the nest for only 8-12 days, but during that time, mama needs to find and deliver 10x her weight – or more – in insects to feed them and herself!

Where to look for savannah sparrows: they are ground foragers, look along roadsides, in short grass or resting on a low branches.

Summertime Birds in the Grassland Margins

Our area’s unique mix of open grasslands, fields with deciduous trees lining the edges provides warm weather welcome for many songbirds, including colorful warblers, orioles, and other passerines. Many raise families here. Look in near-by trees and bushes for these beauties. Note that the American Birding Association recommends limiting the use of recordings and other audio methods of attracting birds, especially in areas occupied by threatened and endangered species.

This petite dynamo flies directly over the Gulf of Mexico in one long, non-stop relay.

Fun fact: males sing to attract a mate, but may play hard-to-get for a few days before finally closing her. Once mated, the female vigorously chases away any female competition!

And Finally – the Warblers!

Something about a new world warbler (also called wood warblers)  generates so much passion that people travel across the world to see them. Perhaps it is their fantastic array of colors, crisp black and white, sunshine yellow, crimson, and azure, or maybe it’s their feisty, indomitable spirits packed into tiny delicate packages is what captivates us? Whatever it is, their presence thrills!

Do they breed here? Some like the yellow and common yellow warblers, yes. Many are just passing through on their way north.

Conservation status: all declining, IUCN (DataZone) individually lists them from Critically Endangered to Least Concern.
Migration: Mexico, the Caribbean, and Central and South America. One species, the blackpoll, travels 12,400 miles roundtrip every year.

Have you seen any of these birds?

Contributor, Roberta Kravette, is the editor of Destination: Wildlife dedicated to responsible wildlife tourism as a means to educate, inspire, and yes, save the planet. She is an ardent lover of, and frequent writer for, Grassland Bird Trust and all it is doing to help preserve grasslands, birds and the Earth.