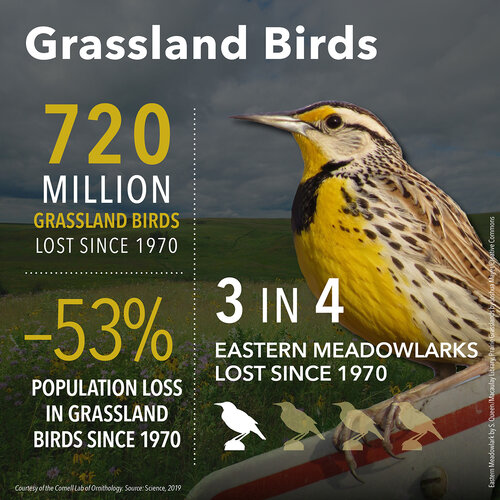 The U.S. and Canada have lost more than 2.9 billion birds since 1970, according to a Cornell Lab of Ornithology and American Bird Conservancy report.

Grassland bird species suffered the steepest declines, losing 53% of their population, or more than 720 million birds!

Widespread loss and degradation of habitat from agricultural intensification and urbanization caused the largest declines. Feral and free-roaming domestic cats kill 2 billion birds a year, while collisions with glass, buildings and other structures and widespread use of pesticides kill hundreds of millions more.

“The story is not over,” said coauthor Michael Parr, president of American Bird Conservancy. “There are so many ways to help save birds.”

Parr said policy decisions such as strengthening the Migratory Bird Treaty Act are needed. “We can also work to ban harmful pesticides and properly fund effective bird conservation programs. Each of us can make a difference with everyday actions that together can save the lives of millions of birds… like making windows safer for birds, keeping cats indoors and protecting habitat.”